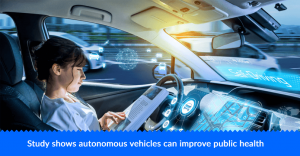 The global automobile industry is changing, with technologies such as Electric Vehicles (EVs) and Autonomous Vehicles expected to enter the market in increasing numbers in the following years. However, the focus of this article is to highlight the positive public health impact that autonomous vehicles can have on society.

According to a recent study by the Barcelona Institute of Global Health (ISGlobal), widespread adoption of autonomous vehicles can potentially improve public health. However, the study highlighted that this would be possible if the technology was adopted according to a specific model. The model states that there would be public health benefits of autonomous vehicles that are electric and under a ride-sharing system.

Autonomous vehicles are currently ranked on a six-point scale, with zero referring to complete driver control to five being a completely self-driving car. Forecasts for the sales of autonomous vehicles indicate that they will take up 40% of market share by 2030, up from about 5% in 2020. The authors of the study highlight both direct and indirect benefits of the technology, though they cautioned that policymakers have given limited attention to the impact autonomous vehicles could have on public health.

“At the international level, we are still seeing very little research or planning by the authorities in anticipation of the advent of these new transport technologies, even though autonomous vehicles have the potential to significantly modify our cities and the way we travel. And this innovative autonomous technology will also have an impact on public health,” said David Rojas, the first author of the study paper.

“The advent of autonomous vehicles may result in either health benefits or risks depending on several factors, such as how the technology is implemented, what fuel and engines are used, how self-driving cars are used and how they are integrated with other modes of transport,” he added.

The authors also noted that there could be potential harm if autonomous vehicles are introduced under a different model.

“AVs could increase some health risks (such as air pollution, noise, and sedentarism); however, if properly regulated, AVs will likely reduce morbidity and mortality from motor vehicle crashes and may help reshape cities to promote healthy urban environments. Healthy models of AV use include fully electric vehicles in a system of ridesharing and ridesplitting. Public health will benefit if proper policies and regulatory frameworks are implemented before the complete introduction of AVs into the market,” the study noted in its abstract.

One example of a proper policy that the authors discussed referred to how integrating autonomous vehicles in a public transport setting could prove beneficial if activities like cycling or walking are introduced as well. Similarly, the study highlighted the risk that technology can reduce physical activity, leading to higher incidents of diseases. The research demonstrates that autonomous vehicles could prove to be beneficial for public health but only if they are adopted in a regulated and well-integrated manner. Failure to do so can lead to disadvantages and economic losses, and this is something that policymakers need to consider.