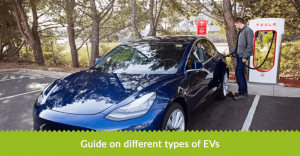 The market for EVs is expanding. According to the International Energy Agency, in 2018, the global electric fleet increased by 2 million. There were about 5.1 million electric vehicles in the market in 2018. Government policies, such as tax reductions and exemption, play a significant role in this.

With a variety of EVs in the market, consumers have a choice in purchasing an EV that fits their budget. Before deciding on which EV to buy, you must consider the different types of EVs available in the market.

Some EVs use electricity as their principal source of power, while others use gasoline and petrol in combination with electrical energy to operate a vehicle. The major type of EVs are as follows:

BEV falls under the category of All-Electric Vehicle (AEV). These vehicles run on electricity only. The “engine” is composed of a motor powered by a rechargeable battery pack. Hence, a BEV needs recharging after the battery depletes. Instead of an internal combustion engine, BEVs use motors and controllers. Currently, BEVs do not have significant mileage, which is a constraint when it comes to purchasing an EV. Moreover, there aren’t many charging stations available.

There are three levels of charging stations:

A BEV can also be charged using the regenerative braking mechanism. This mechanism is present in all EVs. When applying the brakes, the kinetic energy converts to electric energy. Tesla and the BYD, a Chinese car manufacturer, are the leading race for BEVs. Tesla Model 3 is a popular BEV, which is a luxury electric vehicle and has a range of 240 miles. Most BEVs don’t have this mileage. The average range for BEVs is 190 miles. However, with the introduction of new models, it is estimated that the range of BEVs increases by 17% every year.

FCEV is another type of vehicle that falls under the category of AEV. Instead of a battery pack (as found in most EVs), FCEV has a fuel cell, which generates electricity to power the vehicle. Hydrogen gas is the fuel source in an FCEV. The electrochemical reaction combines hydrogen atoms with oxygen atoms. The energy produced during this reaction is converted to electrical energy, which is then used by the motor to power the vehicle. Hydrogen fueling stations are present in limited places, which include California and Hawaii. Hence, FCEV isn’t as popular as other EVs.

FCEV also uses regenerative braking to charge its battery. The latest FCEV has a range of 250 miles. The Hyundai Nexo is a popular FCEV model. One of the main reasons why FCEV is not successful on the market is because of the price.

PHEVs have both an ICE and the electrical components (electric motor and battery). Hence, the reason why PHEV have smaller battery packs when compared with BEVs. When brakes are applied, the motor works as a generator to power the battery pack through regenerative braking.

Unlike conventional hybrid vehicles, PHEV can also be recharged using a charging station. PHEV has two modes: electric and hybrid. Initially, the automobile operates on electricity until the battery depletes. When the battery runs out, the vehicle runs in hybrid mode. The range of the car in electric mode is 10 to 40 miles.

Both BEV and PHEV have a DC-DC converter and an inverter. To power, the motor the inverter converts the DC voltage from the battery pack to an AC voltage. When the battery charges through regenerative braking, the DC-DC converter transforms the voltage, generated by the motor, to a lower voltage.

HEV has ICE and electrical components. However, the main difference between HEV and PHEV is that PHEV can run on electricity alone, but an HEV relies on gasoline. Gasoline is the principal source of fuel for an HEV. These vehicles do not recharge with a plug-in charging station.

Regenerative braking recharges the battery of an HEV. This feature saves fuel, especially when the care is idle. The battery provides power to the air conditioning when the car is in idle mode. Since a hybrid vehicle has a gasoline engine in conjunction with an electric motor, the combined power of the vehicle exceeds that of a conventional car. This feature is called power assist.

Electric-powered vehicles are the future. As car manufacturers shift their focus from conventional vehicles to EVs, it is only a matter of time before more consumers will make the transition as well. With subsidies and tax incentives, the government is trying to speed the process.