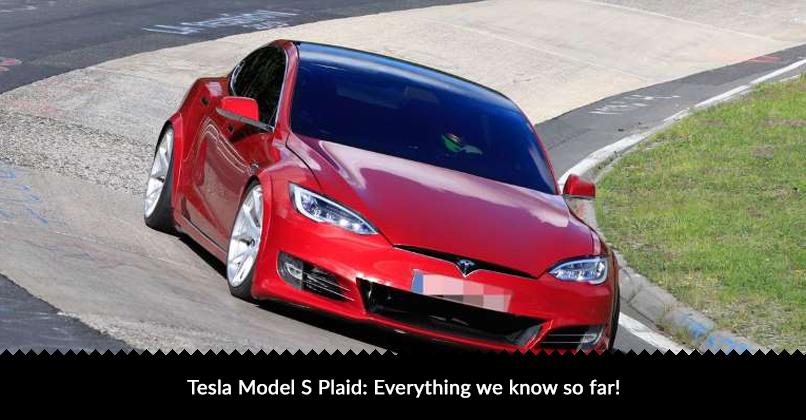 Tesla launched the Ludicrous Speed upgrade for the Model S sedan four years ago, claiming that the next thing to come from the automobile manufacturer is going to be Maximum Plaid.

The Plaid mode was basically vowed for the new Tesla Roadster and was also previewed (prototype) at the Roadster reveal in November 2017. Following Porsche’s reveal of Model S’s rival, Taycan, Elon Musk promised to take its electric sedan to Nürburgring.

One week after, Nürburgring saw a unique Model Ss which is a new Plaid version of the car.

So, here is all that you should know about Tesla’s Model S Plaid:

It was in 2012 when the Model S was launched for the first time. It came with a single motor powering the rear wheels. Later on, in 2014, an all-wheel-drive version arrived with a motor for each axle. Presently, it is the only configuration available for the Model S.

Tesla has upped the game with the integration of a third motor. Musk even confirmed it on his Twitter last month but did not provide any further technical details. The plus point of having a third motor is Torque vectoring, which comes with the ability to control the wheels’ action on the opposite sides of the car so you can manage the car magnificently.

Take the new Acura NSX, for example. It has a motor for each front wheel. While making a turn, NSX overdrives it’s outside front wheel and then drags the inside front so the car can turn more sharply. Both Lotus and Rimac are developing EVs with each wheel having a motor of its own. Recently, Ferrari just revealed the SF90 Stradale Hybrid that uses a similar front-axle set up like the NSX.

For now, it cannot be said with certainty if the Model S Plaid is going to use two motors at the front and rear axle or vice versa. Whichever way it is going to be, a three-motor Model S is going to grab attention. Also, the three-motor Plaid setup is all set to move on to the Model X crossover and the Roadster as well.

Tesla released a video of the Model S Plaid prototype demonstrating a quick lap at Laguna Seca with a development driver is at the wheels. This happened right after Tesla announced its intent to go to the Nürburgring. Model S ran a 1:36.555, which Tesla claims as a record for four-door cars.

The track itself doesn’t sanction lap records, but compared to 600-hp Jaguar XE SV Project 8, which ran a 1:37.54 around the Monterey, California circuit, Model S was quicker.

The production is expected to begin next year (Hopefully)

According to Elon Musk, by next year’s October or November, the seven-seater Model S Plaid would go into production followed by three-motor Model Xx and Roadsters. Though Tesla is notorious for failing to meet its self-imposed deadlines, the testing of the prototypes indicates that we would be seeing Model S Plaid quite soon.

Model S could be quick on the Nürburgring, Too

Though Tesla has not yet released a lap time for the Model S Plaid nor it has made an official record attempt, it has tested cars in the open Industry Pool lapping sessions. Sources reveal that the Model ran a 7:23 in traffic per their stopwatch. If that is an actual representation of what it will run with the timing gear turned on, it is impressive, to say the least.

The Porsche Taycan ran a 7:42, though the car that set the lap was not the faster Turbo S, so we can anticipate a lot more from the German brand.

Not only Powertrain Mods

Compared to the Model Ss that you can purchase today, the cars Tesla is bringing to Nürburgring, are unique and different in many ways. Last month, a few spy photos showed red and blue prototypes with big fender flares having enough space to accommodate larger tires and what seem to be carbon-ceramic brakes.

There are aero mods as well as a large wicker bill on the spoiler. The cars that were spotted on the ‘Ring recently showed large vents behind the front wheels, and an enormous diffuser was seen on one of the prototypes too.

Prototypes, including Michelin Pilot Sport Cup 2s and Goodyear Eagle F1 Supersport RS, were seen with sticky tires. Rubber tends to be more track-focused than any other material Tesla fits in its cars. Tires like the Cup 2s and the Supersport RS assure good lap times in suitable conditions.

Musk tweeted that “final configuration used at Nürburgring to set the record will go into production around summer 2020, so this is not merely for the track.” This is expected to become the most expensive variant of the Model S (with the current performance of Model S starting just under $100,000). Musk has revealed that it is going to cost less than the competitors. But does that mean that it is going be priced at less than $150,000-plus Taycan Turbo? The $185,000-plus Taycan Turbo S? That is yet to be seen.