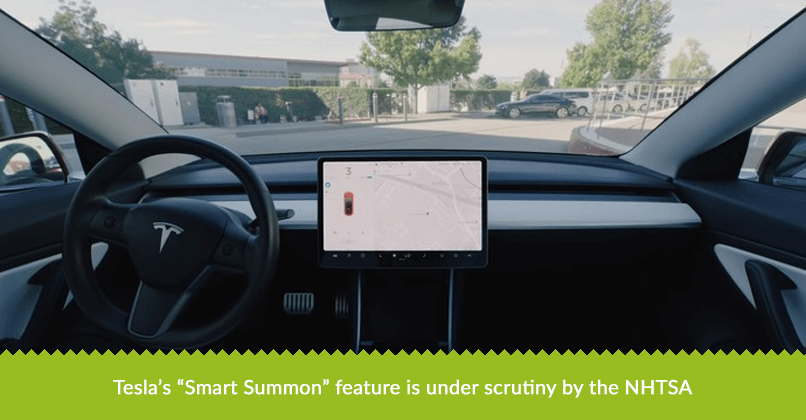 The automobile industry is gearing towards self-driving and autonomous cars. Although it will be several years before such vehicles replace conventional vehicles, automobile companies have introduced some features that give a glimpse of how autonomous vehicles will be.

Automakers promise that an autonomous vehicle will make highways safe since accidents due to human error will cease to happen. However, the automobile industry has a long road ahead before we get a fully autonomous vehicle that requires no input from a human being.

Features such as cruise control, lane assist, and others are some of the features that cars have, which detect obstacles and take necessary action. Tesla is among the leading companies that have come up with features for self-driving vehicles. The latest of these has been the “Smart Summon” feature. This feature was part of the software update that Tesla introduced.

Tesla customers, who purchased Full Self-Driving Capability or Enhanced Autopilot, were able to use the “Smart Summon” feature as part of the software update. The feature allows the car to navigate the parking lot and reach the driver. A blog post on Tesla’s website says, “It’s the perfect feature to use if you have an overflowing shopping cart, are dealing with a fussy child, or simply don’t want to walk to your car through the rain.” However, it does warn users to “remain responsible for the car and monitor it and its surroundings at all times.” Through an app on a user’s phone, the feature summons the car that is within 200 feet of the user’s position. By holding the button, the car drives to the location. The car stops when the user releases the button. The Smart Summon feature is not fully autonomous since a human is controlling the vehicle through an app.

The other features are for enhancing the entertainment system. Software Version 10.0 also introduced streaming services, including Netflix, YouTube, Hulu, Hulu +, and others, as part of the infotainment system. In addition to this, Tesla is working to provide access to the Spotify Premium account in the car.

A few days after this news erupted, the National Highway Traffic Safety Administration issued a statement that it was aware that Smart Summon does not work sometimes. Since the Smart Summon function does not always work accurately, the NHTSA was quick to take action. Although there were no injuries reported, the National Highway Traffic Safety Administration (NHTSA) started its investigation. The NHTSA responded that it is “aware of reports related to Tesla’s Summon feature. We are in ongoing contact with the company, and we continue to gather information. Safety is NHTSA’s top priority, and the agency will not hesitate to act if it finds evidence of a safety-related defect.”

NHTSA contacted Tesla for further inquiry, though there hasn’t been any news from Tesla or NHTSA regarding the issue with the Smart Summon feature.

According to the California Department of Motor Vehicles, the feature is not fully driverless. Instead, the driver is responsible for the accidents. Hence, they should make sure that whether it is safe to use the feature or not.

Currently, Tesla sells its Full-Self Driving feature in its cars for $6,000. Many were skeptical about the rise in the price because the FSD is not fully autonomous. All Tesla vehicles come with the Autopilot feature. This feature offers adaptive cruise control as well as lane assist. The FSD takes things up a notch as the car can make lane changes without assistance from the driver. In addition to this, the FSD system will have a traffic light and stop sign detection system. As the price for the FSD keeps on increasing, many consumers are waiting for this feature to be made available. However, many expect that there will be more price hikes.

The regulatory bodies have not caught up with the evolving automobile technology. Because of this reason, we have seen the Smart Summon feature go haywire. If NHTSA hopes to improve road safety, it needs to introduce laws and regulations that ensure the proper testing of such features before they are made public. In addition to this, automakers need to be more responsible when introducing autonomous features.