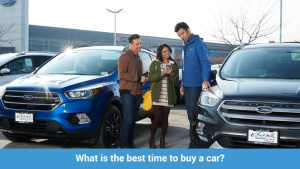 Buying a house and buying a car happen to be two of the most stressful purchase decisions of your life. It takes a lot of time, research, and effort to find the right ones for you. With cars, there are so many options that the moment you enter the dealership and a sales representative begins telling you about each of them, your mind gets boggled. But all of this could transform into utter joy if you are able to get a good deal.

You might think that the best time to buy a car is only about having money, it isn’t. According to Kelsey Mays, Cars.com’s senior editor, “Timing can be the difference between saving hundreds or thousands of dollars when buying a car.” She further said that as far as discounts are concerned, there is no surety of that. There no such rule which urges the dealer to jump their discounts at a particular time of the week/month/or year.

Read on below to know about the perfect times, all year round, to buy a car.

In recent years, December has been the best month for buyers who look for discount before making a purchase. There is a reason for that. The thing is, dealers and automakers look for more deals in the year-end sales so that they can clear out the inventory as much as possible.

From 2013 to 2018, December has was ranked as the best month for incentives four times. Brands which manufacture luxury cars rarely offer huge incentives but in this month, they have great deals for leasing and financing cars.

Although December is an ideal time to unload older inventory, car sellers start a few months ago. The bulk of model year changeovers arrive traditionally n later summer and early fall – September. So the dealers want to redo their showrooms so that they can display the new models.

As September falls during this period, Motor Intelligence reports that it was ranked among the top three months of the year for car sales from 2014 to 2018.

A week after Christmas

This is quite a common sight. You must have noticed that before any big holiday, car sellers begin to put a lot of time and thought into their savings offers and advertising. It is advised that you do some homework and see if you are really getting a good savings deal. But anyhow, holidays happen to be a great time to win a good discount.

Discounts tend to increase because when weekends come at the end of the month, dealers are in a hurry to hit their targets and sales quotas. And with holiday weeks, dealers try to clear their year-end inventory and hit as much sales numbers as they can. Normally, the week between Christmas and New Year’s car companies witness the highest new-car incentives.

Best times to buy according to car type

It is possible to find the best deal for a particular car model in a specific month. According to TrueCar, between the year 2011 and 2015, these months were the best for purchasing certain car models. The company analyzed more than 12 million transactions.

If you think big car sales take place only around Christmas time, think again. Memorial Day, Labor Day and Black Friday also have some of the biggest new-car discounts. Dealers and automakers roll out the promotions leading up to these days so it doesn’t necessarily have to be a weekend.

Few other good times to purchase a car

If you have to shop for a car outside these months or holiday weekends, your luck hasn’t run out yet. You could get some really good deals a few other good times too.

People are off from work on the weekends and therefore, dealerships are quite busy. So, it is best that you go car shopping earlier in the week so that you can have the salesman’s full attention and time. You will be able to negotiate a better price as well. According to TrueCar, Monday is the day of the week that yields maximum savings which happen to be 0.61% more than Sunday. Followed by Thursday and then Wednesday.

The second best time to visit these people is near the end of the month because, at that time, the salespeople are more focused to hit their targets and quotas for the month. Also, they might be more willing to give you a deal during the crunch time. But, there is a catch. There is no foolproof way to know if the sales team has met their quotas. But with their willingness to negotiate on the price, you might get an idea.

As mentioned earlier in the words of May, the end of a model year indicates that now is the time to move out the old inventory to make room for the latest model. But, it is important to know that this doesn’t necessarily coincide with the calendar year. So, if your heart is set on some particular vehicle, it would be feasible to know the timing of the latest model as in, when it will get phased out. And then buy it when it is not the hottest article on the market.

On the other hand, if you are not really concerned about getting the latest model, you might be able to avail big discounts on the car the dealers want to clear from their inventory to make space for the incoming vehicles.

The end of the model year is not the only time when you can score a deal. When new models are launched and introduced in the market, dealerships offer rebates and incentive to lure people to visit them. So, if you have your eyes set on a particular model, find out when its next version is going to get released and see whether you could get any special deal or offer.

Last but not least, watch out for those vehicle models which are getting phased out completely. This could mean that the car will depreciate quickly but at the same time, it could be a good opportunity to get a deal. So, before you jump on a discontinued model, see that why did it get phased out and know the reason the manufacturer stopped making them.

Now, if it simply a matter of some shuffling up, you really don’t have any reason to worry. But if the car model as performance or reliability issues, it may not be worth getting a discount for.

No matter what time of the year it is, you should be in the best position possible to bargain and get a car on at a low price. This means that you should have an adequate down payment at hand along with a solid credit score unless you plan to pay in cash for it. In the absence of these, you would end up paying more than the car is actually worth due to high interest charges.

If you don’t really have an immediate need to get a new car, these are some of the best times to buy one when you have done your homework and have saved enough money for it.  Patience and timing are two of the most important things while you purchase a car and could ease some of the heavy-lifting your bank account has to do as you get your dream car.

Taking over a car lease

There is another way to get a car too, and that is via taking over someone’s lease. Here are some of its benefits: